America, supposedly the land of the free and home of the brave, has a crisis.

An indication of this crisis is America’s rate of incarceration, which happens to be the highest in the world.

What is the crisis then?

But for our volitional ignorance and lack of moral courage, we have become a conquered country. We no longer assert our sovereignty and God-given freedom. We are subjugated by local, state, federal, and world governments. We are controlled by legal schemes and regulations which are applied by government officials who make arbitrary decisions that further erode freedom.

The results are undeniable. We do not know how governments and systems defeat our freedom. Thus, we do not fight effectively to resolve what ails us. We do not assert our absolute authority in the American Republic. Rather, we view the impact of those who enforce these systems, legal schemes, and regulations, and, regrettably, we accept the results while knowing something is wrong without knowing the remedy.

Consider the justice system. Most Americans view the courts and believe justice is achieved. Well, perhaps this is true in some cases. However, over the recent decades, after thousands of cases have been reversed based upon DNA evidence alone, the notion that justice was achieved should be in doubt.

The lesson is clear. We blindly accept that investigating officials, law enforcement personnel, and legal authorities do what is right when often they do not. Whether prosecutors, defense attorneys, FBI agents, judges, or citizens who testify as witnesses, the legal system denies justice and the result is often deceit and corruption.

If we blindly accept that officials secure justice, when they do not, perhaps these very officials know we blindly accept their incompetence, misconduct, malfeasance, misfeasance, and nonfeasance. After all, they know the sysyem will grind onward and they will remain untouchable. Who will stop them? The American people? The ignorant, apathetic, and fearful?

In the following video, which was made several years ago, I assert that Benjamin Glassman failed to dignify a finding by the OCC which effectively absolved an innocent man of culpability for a crime he did not commit. Notably, what I did not mention in this video, which is equally eggregious, is that Glassman lied about shredding evidence that does not exist and never existed. He lied to the people of Ohio. He failed to perform his lawful responsibilities.

We cannot allow the likes of Glassman and the current US Attorney, Kennth Parker, to commit such acts while in office without repercussions.

It is time for solutions. 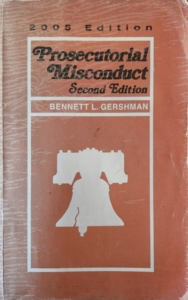