Knowledge is not power. Rather, what is done with knowledge is power.

A man may have knowledge and do nothing with it. For this he is weak and ineffective. Another man may have less knowledge, but be more purposeful with its use. For this he is powerful. If Americans are to save the republic, restore freedom, and solve a myriad of problems, like reducing the number of people in prison, we must know and use knowledge effectively.

For a more indepth explanation of the use of knowledge, please watch this video which underscores the power of a sovereign people. Legal versus Lawful

The End of Justice uses a schematic known as the Four Courners of Justice (FCOJ) diagram to demonstrate how and why a legal case is unjust. Only by measuring individual cases will we understand how and why justice is subverted.

Before we review the FCOJ diagram, let’s consider a premise as to why Americans are disproportionately incarcerated.

Americans are ignorant, apathetic, and fearful. As a result, they are far too accepting of the personal and institutional arrogance of governing officials. Thus, when government officials are unaccountable to the people and the law, they become the masters and the people become compliant and subservient. Such a dynamic is the antithesis of freedom.

As Thomas Jefferson once stated,

“If a nation expects to be ignorant and free, in a state of civilization, it expects what never was and never will be. If we are to guard against ignorance and remain free, it is the responsibility of every American to be informed.”

In order to effectively resolve the incarceration epidemic, which is a microcosm of our greater cultural crisis and loss of freedom, we must grapple with our failures as a people. We must acquire knowledge and use it wisely. In short, if we remain ignorant, apathetic, and fearful, we will never overcome the institutional arrogance that now reigns supreme over our culture. Pointedly, if we fail to assert our own sovereign powers, we fail to enforce the inherent limitations and powers of all governments.

May we acquire knowledge and use it in powerful ways. Let’s begin with the Four Corners of Justice diagram. 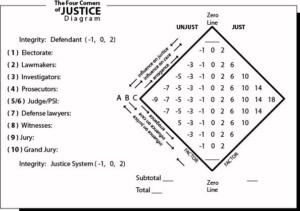 The Four Corners of Justice

If the American people were knowledgeable, engaged, and courageous, the line which reflects “A” would represent the proper flow of power in our republic and ensure justice. Beginning with the “Electorate” and the “Grand Jury” at the top and bottom of the list, the power would flow downward and upward, respectively, toward the judge.

If the people exercised their power, they would guard against injustice. They would apply the requisite pressure to ensure that each component within the legal system sought to defeat what is unjust. Each component would ensure accountability to truth. Ultimately, given the constraints of courts, the judicial process would reflect the virtuous and wholesome intent of the people and the proper enforcement of law.

Since Americans are not knowledgeable, engaged, and courageous, line “B” represents the inverse effect in our judicial system and culture today. Beginning with the court, prosecutor, and defense lawyer, since they do not respect the power of the people (a people who no longer respect their own power), these components unduly influence the outcome of criminal cases. These officials are not held accountable. Regrettably, the power of the judicial process flows from the center of the list and outward to the dilution and utter demise of the electorate and grand jury, the sovereign people themselves, the last checks and balances of a reckless government.

Is there any wonder the people, who are represented by components (1) and (10), are abused by officials and a system that intends to take advantage of the people’s ignorance, apathy, and fear?

As a result of the flow of power represented by line “B,” the arrogance of the judicial system, line “C,” reigns supreme. Arrogance prevails because the people do not.

This is exactly what Benjamin Glassman and Kenneth Parker did. They reigned supreme when they should have been humble and subservient to the people and truth. They abused their authority.

These concerned citizens of Ohio had knowledge when they met with Glassman and Parker in October 2018, knowledge that is being used powerfully right now. With knowledge, these men seek to prevail over the arrogance of both the current US Attorney Kenneth Parker and former US Attorney Benjamin Glassman.

Please continue to the Blog for a more indepth review of Glassman’s and Parker’s corrupt conduct.